From Jiggywikki, a Banjo-Kazooie wiki
(Redirected from Grunty's Lair)
Jump to navigationJump to search

Gruntilda's Lair, also known as simply Grunty's Lair, is a building in Spiral Mountain and the residence of Gruntilda, with its entrance being shaped like her head. 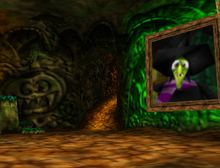 The first room of Gruntilda's Lair in Banjo-Kazooie

In Banjo-Kazooie, Gruntilda's Lair is the game's hub world and can be entered by using the bridge in Spiral Mountain. Banjo and Kazooie are forced to enter it after the evil witch kidnaps the bear's sister, Tooty, in order to steal her beauty. The only way to reach Winkybunion Tower, the top of the lair and where Gruntilda is fought, is by venturing through the worlds inside to obtain Jiggies and complete the Jigsaw Pictures until the entire lair is traversed.

In Banjo-Tooie, Gruntilda's Lair has been mostly destroyed, with rocks blocking the way and only the entrance left standing, that being where Cheato is found.

“Now you've entered my fair castle, I'm going to give you lots of hassle. Before you can go up a floor, I'll test your brain a little more. When an answer is correct, with button

In Banjo-Kazooie: Grunty's Revenge, Grunty's Lair appears as the final world, with 50 Jiggies being required to enter it. Inside, Mecha-Grunty is fought and, when she is defeated, Banjo is forced to play a quiz. The questions are fairly easy, with them all asking "Where is this?," "Where would you see this?," "Can you beat this game?," "What makes this sound?" and "Where would you hear this?," followed by a sprite, sound or mini-game. After Banjo gets 2 answers right, he has to fight Klungo again and, once he defeats him too, the quiz resumes. After 5 questions have been answered correctly, Mecha-Grunty takes him to Winkybunion Tower where the final battle against her takes place.

In Banjo-Pilot, the entrance to Gruntilda's Lair can be seen in the background of Spiral Mountain although it is never entered.

In Banjo-Kazooie: Nuts & Bolts, the entrance to Gruntilda's Lair can be seen although it can't be entered due to the rocks blocking the mouth. The lair's left eye can be picked up with Mumbo's Wrench and needs to be taken to the garbage in Banjo's House during the Lord of Games' challenge.

Gruntilda's Lair appears as a background element on the Spiral Mountain stage. However, due to the stage's rotation mechanic, it will not always be visible.

*Only appear after their respective worlds have been entered and left once.

In Banjo-Kazooie, one of Mumbo's Skulls can be found near Mad Monster Mansion's entrance. It can only be accessed as Pumpkin Banjo, and he transforms Banjo into it inside the room.