The snowman[1][2] is a character in the Banjo-Kazooie series. It is a large snowman and the main landmark of Freezeezy Peak.

In Banjo-Kazooie, the snowman can be found in Freezeezy Peak. Banjo and Kazooie can acquire three Jiggies from the snowman. One of them is located inside its pipe, the other appears on its top hat after Banjo and Kazooie defeat all of the Sir Slushes in the location and the third can be collected by using the Beak Bomb move to hit the snowman's three buttons, what will make the Jiggy appear between its legs,

The snowman has a trail of Musical Notes and Red Feathers on his large scarf, a few Chinkers on its top hat, and the blue Present on its carrot nose.

In Banjo-Tooie, although the snowman does not physically appear, there is a portrait of it in Boggy's Igloo.

In Banjo-Pilot, the snowman appears in the background of the Freezeezy Peak course. 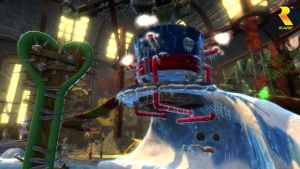 In Banjo-Kazooie: Nuts & Bolts, the snowman makes another appearance in Banjoland where it appears to have been melted and re-frozen. Various Musical Notes and a Red Mystery Egg can be found atop its hat, where a cooling system that crushes ice cubes with a fan is also located.

The snowman has a black top hat, a large red and yellow-patterned scarf spanning down its body and three blue buttons.