From Jiggywikki, a Banjo-Kazooie wiki
(Redirected from Digger Tunnels)
Jump to navigationJump to search 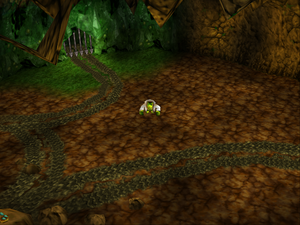 The inside of Banjo-Tooie's first Digger Tunnel

The Digger Tunnels are large tunnels dug by the Hag 1 while heading to the Cauldron Keep in Banjo-Tooie.

Once Klungo is beaten inside a Digger Tunnel, it cannot be re-entered, and attempting to do so will simply take Banjo and Kazooie to its other side.

In Banjo-Kazooie: Nuts & Bolts, the first Digger Tunnel can be seen in Spiral Mountain, although it is blocked by rocks. An Infopost also provides information about it, stating it once led to the Isle O' Hags.