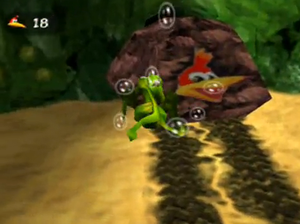 Dragon Kazooie about to destroy a Talon Torpedo Door.

Most Talon Torpedo Doors are simply doors, boulders, or grates that block access to passageways or tunnels. However, there is a certain Talon Torpedo-activated switch in Terrydactyland that causes a time-limited gate to open.